The Law of Double Standards 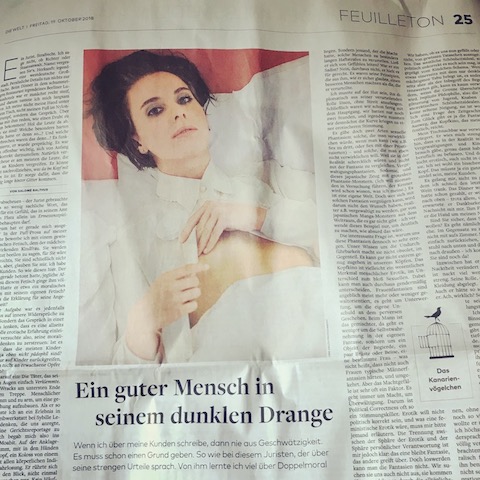 When I write about my clients, it’s not to gossip. I do so only with good reason. I wanted to share this story so as to demonstrate something. Expose a hidden reality – not just gratify sordid voyeurism.

A jurist. Criminal law. Judge, public prosecutor – I won’t say. His name? Forget it. Provenance? A city in the western part of the country. Personal details are besides the point. We ate dinner in the dimly lit restaurant of a five-star Berlin hotel. He was stiff at first; I had to feel things out carefully. I don’t mean under the table, with my hand or with my stocking-wrapped foot. I’m talking about the conversation. What to talk about, how to find a rapport? You have to meet people where they are! Have you had any particularly tough cases recently…? What were they charged with…? It worked; he began to open up. It was important to him to set things straight from the start: the people he despises the most are, no question, child molesters. He is totally incapable of comprehending just what goes through their heads. He makes sure they get sent to rot behind bars.

Despise: such an unobjective word this jurist used, a word for an emotion, a word that in his occupation belongs only to discretion. Why was I the one he picked? In the puff-prose on my website I advertise myself as satisfying a certain niche fetish: that of a girlish woman. Now, you’ll be quick to say: that’s not for you. You’re no pervert. But, make no mistake, I have my customers. Like this one. Who just made it clear to me that he finds this fetish reprehensible. Does he have some kind of moral conflict with his own sexuality? Is that why he’s so tense? Be that as it may, my job isn’t rooting out inner moral contradictions. My job is leading conversations towards sumptuous, erotic experiences. And so I tried to soothe his moral qualms: ‘the fact is, most child abusers aren’t pedophiles.’ They only resort to children because they don’t dare take an adult as a victim – something lost on the populist agitators, ready at the slightest indication of pedaphilic tendencies to grab their torches. They forget that most pedophiles never do anything worthy of being deemed a crime. That’s where he jumped in: in his eyes, the offenders are disturbed. Psychological wrecks from the dregs of society. Human trash, too poor and too stupid to form healthy relationships. Listening to him, I was reminded of an experience I had during my writing workshop with Sybille Lewitscharoff. She recommended we write a piece about a trial. I made my way to the district court in Moabit. The accused sat there, silent, his face buried in his hands. He was a giant; but a shell of a man. He didn’t move, didn’t look up, even when spoken to. Pure anguish. He was accused of having sexually abused children in his locale, on more than one occasion. He’d already spent years in prison for similar crimes. And now he was to be sent behind bars once more, this time for many, many years. The accusations against him described abominable acts. But I wanted to tell his story. And so I tried empathize with him, to imagine his life, a life he would, apart from a few brief intermissions, spend in a cell.

Yeah, my client said, dabbing the corners of his mouth with his heavy linen napkin, that’s what they call a chomo. A child molestor. A chomo doesn’t have any friends. He eats shit. And I’m proud to have personally seen to it that there are a number of chomos doing just that. That’s my rule: lock them up for as long as possible, for life, if I can. That’s the message we need to be sending to society, it’s what we call general deterrence. A way of dissuading, of setting an example. Chomos have it rough. The other inmates punish him in a way the court never could. It’s no secret, and therein lies the deterrent. I wasn’t speaking here with a warden or a corrections officer telling me of breakdowns in his system. I was speaking with someone who holds the power to condemn men to long, long sentences. Is he ruled by emotions? Is he a sadist? No, not at all. He believes this to be just. These are his principles, and in his eyes, it’s exactly these principles that make him a better man than those he convicts.

I had to stay on my guard, be a diplomat, and guide him away from his judge-self without getting into a debate. We’d finished the main course, after all. We had only two more hours, and I needed to set the mood somehow.

There are two types of erotic fantasies: those that, given the opportunity, we would live out (like a threeway, or sex with a high-class prostitute), and those we wouldn’t want to experience in real life –  because doing so would be horrible. Rape fantasies, sodomy, that Japanese stuff with the grotesque monsters. (I don’t want to lead anyone into temptation; those in the know will be well aware of what I’m speaking.) These things belong to a different world. But (s)he who finds pleasure in such fantasies doesn’t ipso facto wish to live them out – e.g., actually being raped, especially by made-up Japanese manga-monsters from space (I use this example to highlight the absurdity). The interesting question is: despite understanding this about them, why do our fantasies excite us so? To understand their infeasibility doesn’t make them irrelevant. To the contrary. Within the boundaries of our minds, it can’t get extreme enough. Perhaps imagination is a fundamental part of (wo)man’s eroticism, in contrast to her plain old sexuality. In any case, when it comes to imagination we can divide things by gender. Apparently, women’s fantasies usually include some aspect of violence. They center on submission, on the woman’s innocence despite the perversion. With men, things are more varied. For him, things are less about his own role in the fantasy. He imagines the object of his desire: two breasts, a pair of legs, a particular woman, or a child, even. This is all not to say that women don’t have typical ‘male fantasies’, and vice versa. But either way, the power imbalance usually plays a role. It always comes down to power, to domination – this is exactly why political correctness is such a turn-off. Eroticism doesn’t want to be politically correct. (I’m still waiting for someone to explain feminist eroticism to me.) This doesn’t mean I don’t understand the gravity of the boundaries between the realm of fantasy and the scope of personal responsibility. The former is not to move beyond imagination; the latter isn’t just about you. And yet, we can’t just get rid of our fantasies. We don’t pick them; they pick us. They can be inspired by the most everyday of banalities. And a child is just such an everyday occurrence. Our impulses and infatuations can’t be suppressed; the more we try, the stronger they become. There is no freedom from the power of the erotic, no ‘sexual freedom’ – unless, that is, you mean free of sex. Whether we like it or not, there are certain realities we must accept. Western beauty ideals, so politically incorrect they may be, are rooted in the the infantile. When an object is associated with the strongest taboo imaginable, and simultaneously serves as the embodiment of all things desirable – then it’s no wonder when the lines between them wind up crossed. Latent pedophilia is no rare disease, it’s the order of the day. Thankfully, we have our fantasies as an escape. We have our imaginations, which hopefully suffice, usually.

I managed to keep the grin off my face by downing the last bit of wine in my glass.

Dinner was over. He’d paid, and wanted to bring me up to his room – despite the conversation we’d just had. Maybe he expected I show gratitude for his tolerating my unseeming behavior. In the elevator: he places his hand around my neck.

Sure you want to keep reading? We’re about to get to business. Unlike me, you don’t have to join him in his room. You can just leave, take the elevator back down and go outside through the revolving doors – I’ll be down in a little bit. You’re still here? He’s undressed.
Nudity changes everything. We’re far less imposing naked. He’d lain down his judge-self with his clothes. He got playful. He has some fantasies of his own, you know. Oh yeah? Yeah, he said. Today he was fulfilling a wish. I’ll give you a truism: where ironclad principles, so dark, nefarious depths to match. The law of double standards. I’ll reveal a bit more: I excited his imagination as befits my niche. There are few customers that turn down my quasi-pedophilic role play, should I offer it. He was no exception. And I’ll reveal (without going into all too much detail): a 13-year old lolita wasn’t enough for him. No, with him, I was to be no older than nine. Afterwards, exhausted from two hours spent in bed, he sought to justify the morality of what we’d done. I didn’t contradict him. I’d used him, it was witchcraft. He was helpless before me and my intimations; I was well-versed, and he only a man. You did nothing wrong, I assured him. Not for what you just did to me, in any case. This isn’t your courtroom. In court you’ll be able to compensate for all this with maximum sentences, for others. What’s that called again? Oh yeah. General deterrence.”