The eroticism of adultery 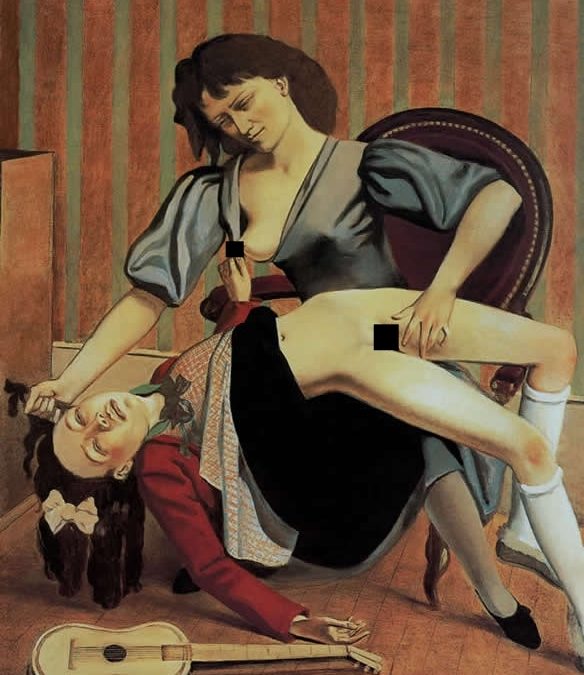 “But what if married men come to you?” the radio host asked me in a rigid tone.

I’m sitting in the gigantic old RIAS broadcasting station in the Deutschlandradio studio. I’m a guest on the program, “Im Gespräch,” which airs every morning from 9 to 10 AM. I repeat: 9. Early. For me that’s prime sleeping time. I feel a bit dazed, not because of fatigue, but because it’s dawning on me that something isn’t right here. I was told the host would maintain a positive attitude towards me and my profession. Everything would be most friendly and relaxed. And now I’m on air with a disenchanted person who has obviously decided to heckle me with her questions.

And yet it’s not that simple. It is very much my business if my customers are married, or divorced, if they’re single or currently in a relationship crisis, or if they have never been in a relationship. Because I have to deal with these men’s desires. Adulterous sex needs its own staging.

Besides, the question is flawed. The question isn’t whether or not I think it’s “okay” when I become the object of adultery. The question is: what does adultery mean – in any given case – for the wife and the husband involved? Most of my customers are married.

How to recognize a married man

How do I recognize if a man who is sleeping with me has a wife? Or, as we escorts put it, if he is one of the good ones, high grade? I don’t necessarily notice it by the wedding band, which you can slip off with hotel soap and cold water if need be. What significance does a ring have if stable partnerships, without marriage, are subject to the same laws? Fidelity for the duration of the relationship. This, of course, is always meant for eternity, as with every marriage, even when it can be dissolved at any time. In non-marital partnerships, the issue of fidelity is even more sensitive. Separating is so simple when there are no vested rights. Here a marriage endures more strain. The married ones are more relaxed. They have less of a reason to panic. Of course, they don’t want to blow their cover; on the other hand, they do accept a certain risk when planning to book and hand pick a high-class escort. Cost-benefit analysis. After all, everyone succumbs to the temptation that tempts eternally. It does seem to make a difference, however, if you have had to be faithful to your partner for two years or twenty.

I recognize a married man by circumstantial evidence, such as the hand-ironed shirt that he carelessly throws on the floor. By the children’s photos on the lock screen of his phone. Or when he tells me at the beginning of the date that he must make a call promptly at 10 PM, warning me not to make a sound during it. Rarely am I allowed to play quietly with his cock while he’s on the phone.

Should I resist? Should I insist on the moral principles of bourgeois society, patriarchy – as a whore?

Nevertheless, I’d often prefer sex with the wife over her husband. What the husbands tell of their wives rouses the desire in me to have them. She is already present in mind anyway, a sublime figure, an inaccessible deity and mother goddess. Yes, I would swear that husbands never speak more highly of their wives as in my arms. And I think I would now more than appreciate hearing the other side of the story.

Should I resist? Should I insist on the moral principles of bourgeois society, patriarchy – as a whore?

Nevertheless, I’d often prefer sex with the wife over her husband. What the husbands tell of their wives rouses the desire in me to have them. She is already present in mind anyway, a sublime figure, an inaccessible deity and mother goddess. Yes, I would swear that husbands never speak more highly of their wives as in my arms. And I think I would now more than appreciate hearing the other side of the story.

Some men say that their wives frequently deny them sex, even affection – sometimes for years or even decades. Not that their wives are no longer seductive enough for them. Cold, hostile wives who show their husbands, with more or less clarity, that they’re only staying with them out of inertia. At least that’s how the husbands depict it. But what do they want? Do they even know? Do they want, perhaps, their wives to go after them more as men, to stand ready, to behave, in a nutshell, like escorts in private hands? Well, then husbands should perhaps also treat their wives like escorts rather than nannies and housekeepers.

Sex in marriage – a must?

Is it even necessary? Must two people who love each another, who are forever beholden to one other, witnesses to one another’s lives, must they, along with all the other usual matters, always have sex on the agenda? Isn’t the closeness, the familiarity, much more valuable, indeed irreplaceable? Must two already anguished individuals copulate virtuosically three times a week in addition to already doubting their relationship? How stressful, what unbearable pressure the media and advertising industry create! My friend Caroline Rosales has a word for it: maintenance sex. It gives me the shivers. Whenever I go down a crowded street I look at people and wonder, will they have maintenance sex today?

Why do people put themselves under so much pressure with sex? You can outsource it. You don’t have to practice every hobby together. Just no jealousy. The consumption of sex for purchase, or an affair, a lover for the wife is not the challenge, but rather a testament of a good marriage, that two people have found a stable foundation in one another and are secure enough for each other. Why not treat each other to pleasure and exchange stories at breakfast, praising one another for a triumphant foray?

Why don’t wives treat their husbands to me?

These women who ostensibly want neither sex nor more money from their husbands simmer with rage and indignation when they find out that I, as an escort, get both from their husbands. I have witnessed such scenes. Not a pretty sight. Most interestingly, they don’t make the scene out of jealousy towards me – who is seriously jealous of a prostitute after all? Even the most frustrated cow, blinded by rage, has the sense to know that it’s not about love or replacing her as a wife. In truth, it’s much more about envy and hate. Wives secretly, severely, begrudge their husbands. They hide their envy, however, because it is not becoming of a good wifey. As for sex with prostitutes she’s allowed to get into a fret, to let out the pent-up hate, without running the risk of behaving outside the norm. It is not decorous to hate your husband because he works and has more money. But to hate him because he spends his pocket money on sex, that’s allowed. These women don’t want love, they want hate. The entitlement to hate.

Marriage and the wedding band as the final symbolic link in a chain by which husband and wife imprison one another, or more precisely, by which bourgeois society imprisons married couples. To me it often seems like a battlefield of bitter enemies, where the thousands of shortcomings in daily life are used to ruin each other. People who can no longer bear one another sleep night after night in the same bed, their thoughts far away as they fall asleep. And in the morning lurk the petty vulgarities, the passive aggression, the betrayal. Only the corset of the daily routine barely keeps them from lashing out at each other. A prison of malice, in which both stoically endure the years given to them on earth. For most married people sex no longer plays a role in their lives. Sex, not to mention eroticism, remains an event of exception. Most partners prefer not to remind one another that sex is something that could concern them. If sex doesn’t exist then logically neither does infidelity. Until one day…

I wish I had told the host that after sex with me some of my customers erotically revitalised their marriages. I am the secret catalyst that rekindles. Colleagues tell me similar stories of customers reporting back glowingly that so much changed after sex with a sex professional, that it set off new sparks. However, they don’t tell us whores that on the phone, but rather in person when we meet again. Sex with their wives in no way keeps them from cheating. Au contraire. The world is suddenly brimming with eros and seduction, and men are excited by their unimagined potential. At the same time their wives probably think that all is tip-top in their marriage. And it certainly is! At least I think so.

How I would love to give my customers’ wives what their husbands are looking for with me. To wake them up, their dormant lust, pent-up for years. For the sake of both husband and wife. A desire that still eludes me.

A couple months ago I received a letter. A letter from a woman. She found my e-mail address on my website Hetaera on her husband’s computer. She googled Hetaera and found out what Salomé Balthus is all about, saw my photos, my naked body in detail. And now she was asking me, with utmost difficulty after sleepless nights (as she confessed): did my husband sleep with you?

An addendum, if I may: since then, as she told me, they again have a very intense love life. The wife no longer writes to me, and the husband did not meet with me again.

I didn’t tell the radio host all of that so early in the morning. Between music tracks we just didn’t have enough time.